Acid Reflux :: The Breaking and the Making of My Career

So, first of all…. HEY! This is my first ever blog post, and I gotta say… I don’t know what the hell I’m doing. But that’s ok, right? Better to dive in the deep end yelling “GERONIMOOOO!” and rise to the surface with a laugh, then stick a toe in with a shriek and a “I’ll just sit over here while y’all play…”

My story that I’ll begin today is long and, at times, lugubrious… and almost always too wordy. But it’s one of claiming power. Of growing and stretching. Of balancing resistance and surrender. And of love. So I have the hubris and humility to share it, and the hope to inspire YOU along the way.

OPERAfit has a lot of birth stories in my mind. Some of it was reinvention of self. Some of it was a revolution of health. But a lot of it was a dream I’ve chased since childhood to make a really big fucking difference in this world. // Side-story: In fourth grade, I won the schoolwide D.A.R.E. essay contest about who you wanted to be when you grew up. I wrote that I wanted to be a “world changer,” like Mother Teresa. //

I went to the University of Richmond for my undergrad after finishing #2 in my high school class. I actually tutored the #1 kid, so I look back at it as a lesson in giving (otherwise I get really fuckin pissed off.. haha). I was a jack of many trades -- most notably a skilled flute player and PROUD band nerd, an academic know-it-all, and a quick-study newbie in choir. I came to college thinking I’d major in flute and French so I could be a UN translator by day, and an orchestra musician by night. That didn’t happen.

I ended up majoring in music (vocal performance), French, and designing my own International Studies major in Francophone cultures. I was fortunate enough to study abroad in Paris, France, for six months during my junior year. It was a MASSIVE learning experience in every way. I drank too much, I got high my first time, I studied in a French university, I traveled to something like 18 countries, I kissed some foxes and some frogs (get it? French? haha), and I found a little more of myself. But at the end of that adventure, it caught up to me. Being in a culture where we drank wine every night, ate dinner till midnight, and sat outside on the trottoir with all the smokers… my silent acid reflux was having a FIELD DAY on my vocal folds.

I left France and started senior year of college with bilateral vocal nodules. Nodes. The doomsday of many a talented singer’s career. The idea that I may never sing classically again became real, and I very clearly remember thinking, “Maybe it was meant to end this way.” There were many dramatic conversations with my mom, heaving sobs, and self-hating journal entries to follow. Joni Mitchell (and the version I grew up with in the 90’s by the Counting Crows) had it right:

“You don’t know what you got till it’s gone.”

But when my temper tantrum ended, I decided I couldn’t let this be the end. So I determined that I would fucking fix it. I would see every doctor, go to any number of sessions with a speech pathologist, and take any sort of drug to get my voice back.

So I did the thing! I healed! I fixed it!! I took about 8 pills daily, but I fucking fixed it. I took Dexilant as my main squeeze, Pepsid on the days the big D wasn’t enough, Gaviscon after most dinners, a multivitamin, a probiotic, 2 bromelain tablets (morning and afternoon), a calcium horse pill, and a Vitamin B complex. Oh, and Flonase for my dustmite allergy.

I also avoided all citrus and tomatoes (“acidic” foods), slept on an incline pillow that messed with my back and pissed off my boyfriend. I did everything my doctors and voice teacher had told me to do -- but EVEN WITH ALL THAT, the one thing I couldn’t beat out of me with a pill :

My voice was inconsistent, and it sent me into high-as-a-kite highs and sobbing-over-a-whole-pizza-alone kind of lows during grad school. I emotionally ate all the cupcakes, pizza, and wine I could afford. I guilt-tripped myself into working out to near fainting when I could “muster the motivation.” I yo-yoed and drove myself crazy. The negative loop of shitty head-space, my angry voice teacher, conditional friendships, competitive tensions, and my inability to handle my own stress were all at odds with me getting a GRIP on my reflux, voice, and happiness once again.

I remember thinking again… “Maybe it was never meant to be. Maybe my body just doesn’t built to handle this singing thing.”

And then I found this thing around Christmas break of my second year of grad school. This totally random, not typically “my kind of thing” thing. This “challenge group” my friend was running that gave me workouts I could do anywhere + nutrition plan that wasn’t calorie-counting or point-counting + a superfoods shake. And all three of those things changed my life. I lost weight, evolved my eating, reinvented my mind, and cured my reflux (yep. for reals. another blog to come on that).

Well, I should say four things... #4 was the idea that I should share these tools and make this a COMMUNITY for people like ME. Other singers who needed motivation, portable workouts, the knowledge of how to feed our bodies with BALANCE, address our insecurities and grow a resilient mindset, and to get off those bullshit meds and ***heal*** our IBS / GERD / LERD / reflux -- not just mask it with with chemicals and boxes on boxes of pills.

So there you have it.

That’s how OPERAfit and my coaching career was born...

That’s how my singing career was born and almost died twice...

And that’s truly how my LIFE as I know it today started!

I actually went live about it on my Facebook page with a few more shades of details thrown in, so check this out if you want to see my real-live face telling a similar story!

So glad you took the time to hang with me today. This blogging thing is kinda fun. :) Until next post, friends!

Acid Reflux :: The Breaking and the Making of My Career 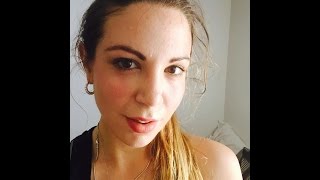 Ellen Vlogs | a day in the life!